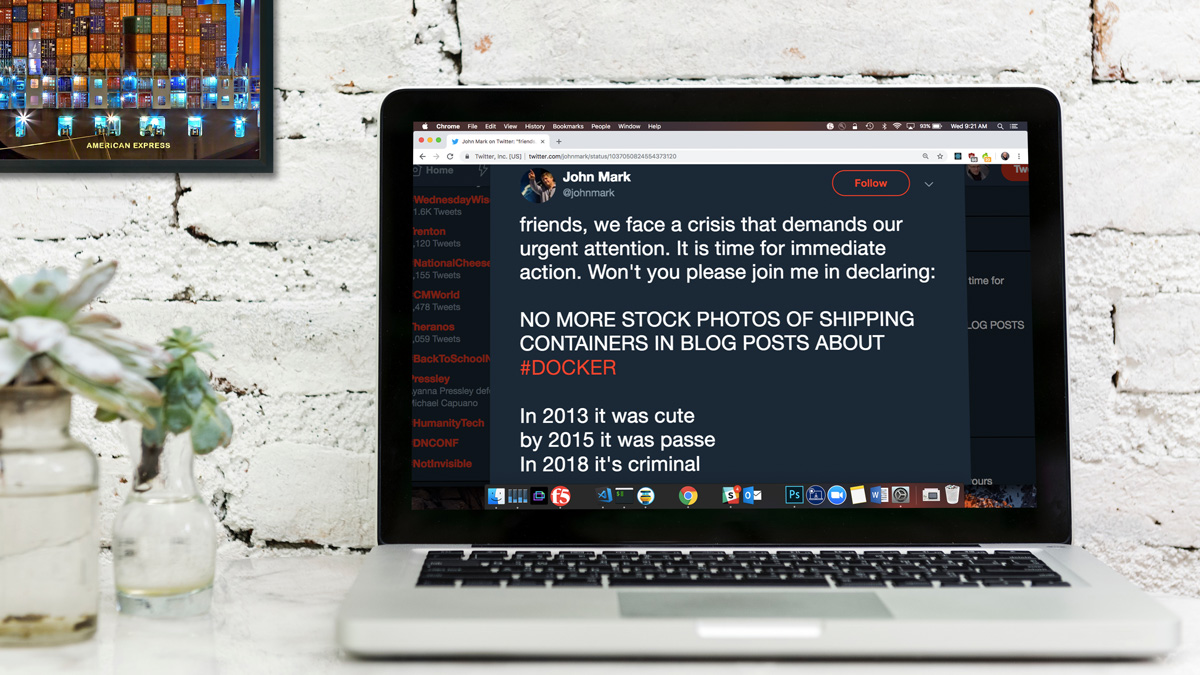 There is no doubt that the inception of Docker changed the way we deploy and run services in production.

Before Docker’s rise in popularity, services would be installed on a host. Whether it was a physical or virtual host was more often than not a capacity question.

Like virtualization, Docker brings a similar layer of isolation, allowing you to deploy an application within a very small OS runtime—a runtime smaller than a virtual host. This reduces the exposure of the runtime environment, which lends itself to the security principle of “only what is needed to run.”

However, as with the isolation provided by virtualization, that doesn’t mean we can ignore security best practices. In this article we are going to talk about one of the most well-understood security practices. Specifically, we will discuss running applications as a non-privileged user, but within a container.

Running applications or services as a non-privileged user is commonplace. It has been practiced for years. When the runtime for an application is a full OS installation, it is easy to understand the risks of running as root.

With Docker, however, it’s not as straightforward to understand or even see because Docker abstracts away much of the runtime environment from end users. Thus it is easy to forget basic security concepts, such as ensuring the runtime user has the fewest privileges possible. To better understand this, let’s take a look at the following Dockerfile.

This produces a bare-bones Redis container. Let’s run this container overriding the CMD instruction with the whoami command.

When executed, the whoami command will return the user executing it. In the example above, it returned root. This is because within our Dockerfile we never specified a “user” to run as. This means that our service ran as the current user for the Ubuntu image. That user happens to be root.

As with the Ubuntu base image, most base images have the current user set to root. The reason for this is simple: base images are usually used as a “base” from which to build other Docker containers.

As in our Redis example, most users take these base images and then install packages on top of them. This installation step requires root privileges, which is why most base images default to root.

Unless we are specifically thinking about the runtime user, it is very easy for a service to inadvertently run as root. The security implications of this are as serious as a root user-owned service running on a full OS.

If the container is isolated, why does it matter?

Remote command execution is a common method used by attackers. When an attacker can use this against a service running as root, it means any execution of code will also be root.

An exploited service can be an entry point for an attacker, whether that service is running as root or not. However, a root owned service makes it easier for an attacker to explore and identify other services.

If an attacker were to install a command such as nmap (not typically installed by default), they could use this tool to find other vulnerable services.

Nmap is a common security tool that is used to “explore” networks. A powerful scan option used with the nmap command is -sS. This option tells nmap to use SYN packets to scan network targets.

To generate these SYN packets, nmap must be running as root. Without root privileges, the nmap command is limited to less informative scanning techniques. Let’s see this in action by running the nmap command with the container we created above.

Now what happens when that same command is executed but we tell Docker to run it as an unprivileged user using the -u flag?

This is a very simple but very real example of why running as root can create vulnerabilities. If an attacker were able to use root access to install a tool such as nmap and execute a SYN scan, this information could be used to attack other services.

While using the vulnerable service as an entry point for attack is possible with or without root, running a service as root makes it easier for attackers to make those attacks more effective.

How to reduce privileges in a container

Docker provides a few methods of downgrading user privileges within a running container. We used one method above—simply using the -u flag to specify the user at runtime.

In the command above, we specified the user as 9000, which isn’t a username, but rather a user ID. With Docker’s -u flag, you can specify either a username or a user ID. Note that when specifying a user ID, a corresponding user does not have to exist.

The user ID used in our example, 9000, is an arbitrary user ID that has no special privileges. In accordance with Linux standards, user IDs between 0 and 499 tend to be reserved. It therefore is advisable to use a user ID with a value greater than 499 to avoid unintentionally running as a default system user.

The -u flag is a nice simple method for downgrading user privileges; however, this only applies when executing the docker run command. What happens if the flag is forgotten? We are right back to running the service as root.

Another method of downgrading user privileges is to use the USER instruction. We can use this instruction within our Dockerfile to change the runtime user during image build. Let’s see this in action.

Earlier in the article we used the following Dockerfile to create a Redis container.

We need to be root in order to execute the apt-get commands on line 2. We do this by adding the USER instruction immediately following the RUN instruction.

This will change the runtime user to user ID 9000, which means any action after the USER instruction, including CMD, will be executed as that user.

Let’s see how this changes our previous whoami example.

As you can see, the whoami command was executed as user ID 9000, which of course doesn’t really exist. This method of downgrading user privileges is a bit better as it adds consistency. Unless the -u flag is used, the resulting container from this Dockerfile will run as user ID 9000 every time.

In this article we explored how easy it is to create a Docker container that runs its services as the root user. We also explored how doing so can lead to serious security vulnerabilities.

Luckily, the solution is as simple as adding a single line to our Dockerfile.

This article focused on the Docker practice of specifying a runtime user. Docker security does not stop there, however. There are many more practices for securing Docker containers that are just as important. A good place to start learning more about Docker security is Docker’s own documentation.